Top Signs of Autism in Toddlers

Top Signs of Autism in Toddlers : How common is autism? More common than you think. According to the CDC, 1 in 59 children will be diagnosed with the disorder.

Perhaps even more interesting, however, is that boys are four times more likely to be autistic. Why? We don’t know for sure but it may be due to different biological factors.

Are you a new parent? Do you ever find yourself asking the question—”does my child have autism?”

If so, you’ve stumbled on the right page. We’ll be going over everything that you need to know below—including what to look out for.

Autism spectrum disorder (ASD) is a developmental disorder that often begins in early childhood. More often than not, it affects an individual’s communication and social interaction.

With that said, the effects vary from person to person. Some people with ASD may require everyday support whereas others may be able to live independently. At the end of the day, it depends on where they are on the spectrum.

The exact cause of autism is not clear. However, there are certain risk factors that contribute to the condition.

For instance, an individual will have a higher risk if they’re born to older parents. Exposure to certain environmental toxins can also increase the likelihood of the condition. Genetic mutations may play a role as well.

Autism can be difficult to diagnose compared to other conditions. Why? There is no medical test that allows doctors to make a definitive diagnosis. Instead, they have to look at a child’s behavior and development.

Generally speaking, symptoms will begin to appear between 12 and 18 months. However, most children won’t receive a final diagnosis until they are age 2.

Does My Child Have Autism? Warning Signs During Infancy

A healthy baby will look at you while they’re being fed. Those with ASD, however, tend to make limited or no eye contact at all. Not only that, but they will not respond even if their name is being called.

Instead, they will be more interested in objects. In addition to that, they will not make any babbling noises, nor will they respond to your cuddling.

Symptoms That Are Often Seen in Children

More often than not, symptoms will continue after infancy. Here are some things that you might want to look for.

Most children with autism will have issues with verbal communication—that is, they’ll have difficulty with speech. In some cases, they might not be able to use language at all.

Even if they are capable of talking, they probably won’t be able to hold a conversation.

Children with autism tend to have poor nonverbal skills. More often than not, they will not be able to understand body language. Similarly, they’ll have difficulty using gestures such as waving or pointing.

As a result, it can be difficult for them to make their feelings are known, which can lead to frustration. As a result, they might act out through vocal outbursts or other improper behaviors.

Children with autism tend to have obsessive behaviors. For instance, they might engage in repeated body movements such as hand flapping, scratching, or headbanging.

The same applies when they’re playing. For instance, they might have a habit of lining up their toys. On top of all that, they might repeat words that you say—this is called echolalia.

Social difficulties are common among those with autism. More often than not, they will not know how to connect with others. As a result, most will not engage in group games.

If anything, they’ll be in their own world. Even if you talk to them, they will not talk back. Because of this, it can be difficult for them to make friends.

Many children on the autism spectrum will have difficulty processing sensory information. Compared to a normal individual, their senses will either be under or over-sensitive.

For instance, it’s not uncommon for them to be sensitive to certain sights, sounds, smells, or taste. Physical touch may also be uncomfortable for some.

More often than not, it can lead to stress, anxiety, even pain.

What to Do If You Suspect Your Child Has Autism

Schedule an appointment with your child’s paediatrician if you notice any of the above symptoms. If necessary, they will be able to refer you to a developmental specialist.

During that period, it might be a good idea to look into early intervention services. These programs will allow you to address any autism-related issues that your child may be experiencing.

Unfortunately, there is no cure for autism. However, it is possible to manage symptoms with proper treatment. Take Blue Sprig Autism, for instance—they offer ABA therapy for those with autism.

As it is, however, the response will differ from person to person. Just because a certain treatment works for one individual doesn’t mean that it’ll work for another.

At the end of the day, you want to work with your child’s doctor to see what will work best with them.

Raising a Child With Autism

Hopefully, that helps you answer the question of “does my child have autism”. As you can see, there are various symptoms to watch out for during their development. When in doubt, consult with your paediatrician!

Do you have a child with autism? What’s your experience been like? Let us know in the comments below!

Related Videos about Top Signs of Autism in Toddlers :

How Can You Tell if Your Child Has Autism?

Related Infographics about Top Signs of Autism in Toddlers : 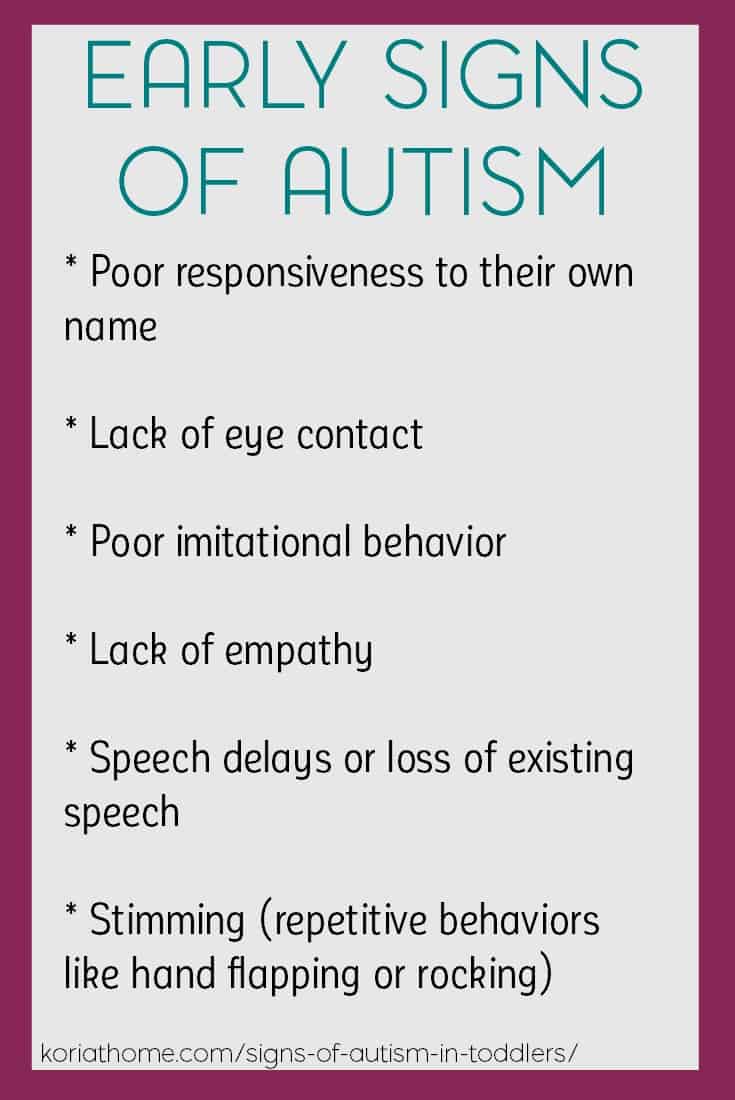 Early signs of autism in toddlers

Top Signs of Autism in Toddlers

Is This The Ultimate Aston Martin?

Should you be sanitizing your makeup?

Why you should never buy skincare products at Sam’s Club

Everything you should know about light therapy masks