The Best Eyewear Brands In The World Today

Good glasses or sunglasses can be hard to find. Having to squint in the meantime doesn’t help. But nor does the fact that there are seemingly as many indistinguishable eyewear brands on the market as there are light receptors in your retinas (seven million, FYI).

Adding to the confusion, many are owned or made by a handful of companies: of the list below, Ray-Ban, Oakley, Persol and Oliver Peoples are all owned by Italian conglomerate Luxottica, while Tom Ford is produced in partnership with the smaller Marcolin. Eyewear is also notorious as a category where mark-ups are eye-watering (as much as 250 per cent on frames and 800 per cent on lenses, according to a Guardian article about “Big Lens”.)

Gauging quality is difficult too: tightening a few screws can be enough for a brand to claim that frames are “made” – or even “handmade” – in a country.

Whether you get what you pay for in terms of materials and construction is one question, but sometimes you’re paying for design or pedigree, which at least is worth more than a random non-eyewear designer label on your frames’ arms. So with that caveat, these 12 brands have historically had a rep for good optics, or are fast building one.

A play on common frame material acetate, Ace & Tate, founded in 2013, is oft dubbed the European answer to Warby Parker, which disrupted the American eyewear market with its direct-to-consumer model a decade ago.

Like its US counterpart, Ace & Tate is able to slash prices by cutting out middlemen and production chain profligacy: its Amsterdam-designed styles, which are handmade in Italy or China, somehow cost less than £100 in some cases – with prescription lenses. It also provides a free try-at-home service if you can’t look in on its London, Bristol, Manchester and Glasgow stores. Ace.

“Anti-Glare” doesn’t quite have the same ring. So after launching its teardrop-shaped shades, designed to protect the areas not covered by US Air Force pilots’ helmets and masks, to the general public in 1937, Bausch & Lomb wisely redubbed them “Ray-Ban” the following year.

It’s more famous as a sunglasses brand but many of its famous styles – including the Wayfarer, Clubmaster and Aviator – are also available as opticals, worn by everyone from Malcolm X to Seth Rogen. Today, Ray-Bans are as evocative as the Top Gun soundtrack, and as ageless as Tom Cruise in the sequel. 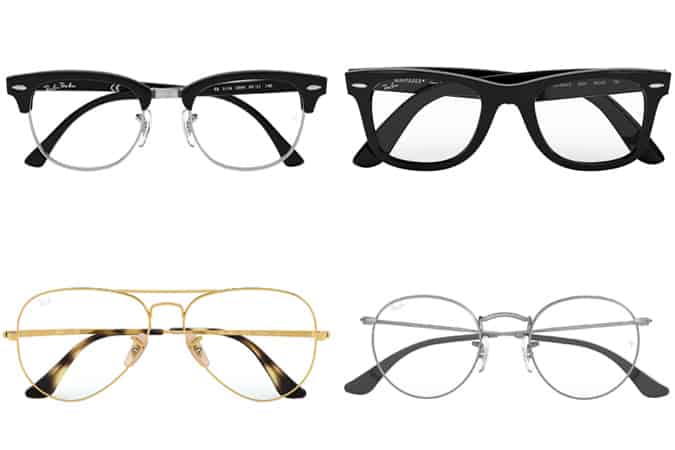 A direct-to-consumer brand, yes, but one that feels reassuringly expensive enough to be stocked at the discerning likes of Mr Porter and Liberty. Cubitts founder Tom Broughton made his first pair of frames at his kitchen table in London’s King’s Cross in 2013; the store there and in nearby Coal Drops Yard are two of its eight outposts across the capital, which offer eye tests for £25 if you buy frames, plus sunglasses (prescription and otherwise), transitions lenses, made-to-measure and bespoke.

NB speccing your specs is genuinely expensive: from £725, with a £200 premium for real buffalo horn. 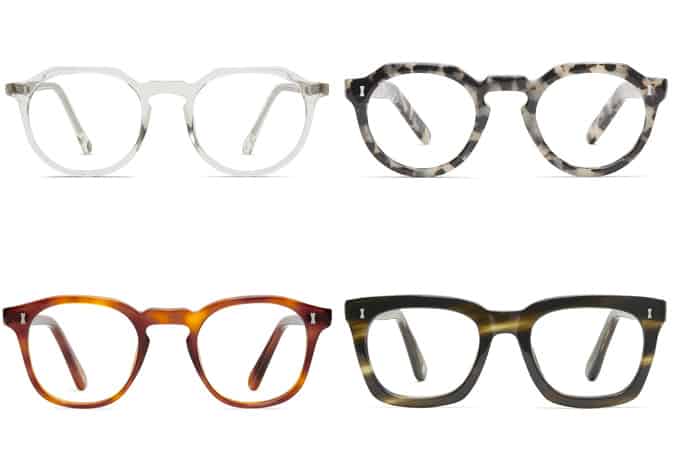 Exactly a century ago, the Kirks were making clothes and buttons in London’s Clerkenwell when they had the vision to diversify. It wasn’t until the nineties though that the company, at one point in its 100-year history the largest spectacle frame maker in the capital, discovered a trunk full of fifties and sixties styles in its archive that informed its Originals range.

A hit on the vibrant club scene, the reissues adorned tastemaking magazines such as The Face and Arena, and music makers such as Oasis, Sir Mick Jagger, Paul Weller and Morrissey. The brand’s showroom has since relocated to Blackfriars. While Ray-Ban was just a glint in American pilots’ narrowed eyes, Italian optician and photographer Guiseppe Ratti in 1917 invented “Protectors” which took off with air forces worldwide as well as race drivers and, er, poets. (Persol is a contraction of “per il sole”, meaning “for the sun”).

Over a century later, the folding 714 sunglasses that style kingmaker Steve McQueen wore in 1968 film The Thomas Crown Affair remains by far the most famous of the brand’s models, but the brand’s opticals also bear the same vintage styling and trademark freccia or arrow on the hinges and arms, “inspired by the swords of ancient warriors”. Not their arrows? Another in the Warby Parker mould, this upstart British start-up has a “rebellious spirit”, which is perhaps why Liam Gallagher wore its Hamilton sunglasses at Glasto. Noel is also a fan of Finlay & Co’s frames, which are sported by staff at several sites of see-and-be-seen member’s club Soho House, as is David Gandy.

The individualistic frames are “handmade by eyewear artisans located in the foothills of the Italian alps”, which is delightfully evocative if nothing else. In addition to eye tests, you’ll find a selection of independent brands in its Soho, London store, including Salt (see below). Only in America could a brand founded in 1987 market itself as “heritage”. But Oliver Peoples did draw heavily from vintage US frames for its initial understated collections, in sharp contrast to brash, bright late-eighties eyewear.

The Sunset Boulevard institution is a fixture in Hollywood, worn by Patrick Bateman in American Psycho and Tyler Durden in Fight Club. (The limited-edition re-release of the latter model wasn’t in the anti-consumerist spirit, but hey.) Oliver Peoples has also created homages to Gregory Peck’s specs in To Kill a Mockingbird and Cary Grant’s gegs in North by Northwest. Few fashion designers have Tom Ford’s ability to enter and own product categories, and boss them. Like Tom Ford colognes and beauty, his eyewear is some of the most sought after in the world.

So good an advertisement was the multitalented Mr Ford’s directorial debut, 2009 film A Single Man, that he was forced to release a style based on Best Actor BAFTA winner Colin Firth’s specially made frames: the TF 5178. The giveaway silver T at the temples is also visible on Daniel Craig’s “secret” agent James Bond in Quantum of Solace, Skyfall and Spectre. Started in 1975 in the garage of Californian motorbike salesman Jim Jannard, Oakley made grips for motocross before branching out into goggles, which he trimmed down and added coat hangers to in order to stop the setting sun side-blinding him while driving parallel to the ocean. High-tech wraparounds played well with athletes, including Michael Jordan, and Tom Cruise, who wore a self-destructing pair in 2000’s Mission: Impossible 2.

Oakley exploded in popularity before its ubiquity detonated its cool factor; always functional, it’s fashionable once more thanks to nineties nostalgia, dad style and Palace. And it’s not just the divisive sports sunglasses: the opticals are arguably a lot more wearable. An OG in two senses, Oliver Goldsmith was established in 1926, just before eyewear became status-symbol accessories: it was the first eyewear brand to collaborate with fashion houses for the catwalk, appear in Vogue and find favour with celebrities such as Peter Sellers, John Lennon and Michael Caine.

The latter style eye-con frequently wore OG off screen and on, notably as spy Harry Palmer in 1965’s The Ipcress File (“Do you always wear your glasses?” “Yes. Except in bed.”) Unusually for the oligopoly that is opticals, the business remains in the family: Oliver’s great-grandaughter Claire oversees it today. Another relative newcomer to the market, Viu does design-led frames that you can try on at home or at one of its growing number of flagship stores across Europe. Priding itself on a transparent production process, its glasses are designed in Switzerland and made in either Italy or Japan.

Designs are cutting edge in more ways than one. As well as fashion-forward frames, some are made using 3D printing technology to minimise waste. 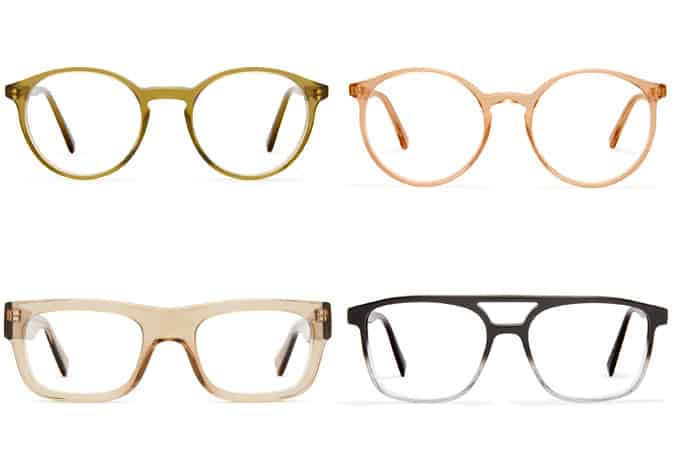 Another native of California, Salt has only been going since 2006 but is nevertheless seasoned: founder Aaron Behle previously worked for Oakley and surfwear label Reef, while head designer David Rose was at Oliver Peoples and on the Quiksilver surf team.

That background is reflected in the form and functionality of its wares: the durable frames are made in Japan by third-generation manufacturers while the brand’s sunglasses feature useful anti-glare polarised lenses. The “memory metal” in its collab with outdoors brand Aether even bends back by itself. How To Lace A Corset Back Dress For Prom Or Wedding

How to Make an Outfit Look More Put Together

Ghost on Starz Fashion Credits: Tariq in a Celine Black and…

Top 5 Looks From the 2020 Emmys: Zendaya in Christopher John…

How to Make an Outfit Look More Put Together