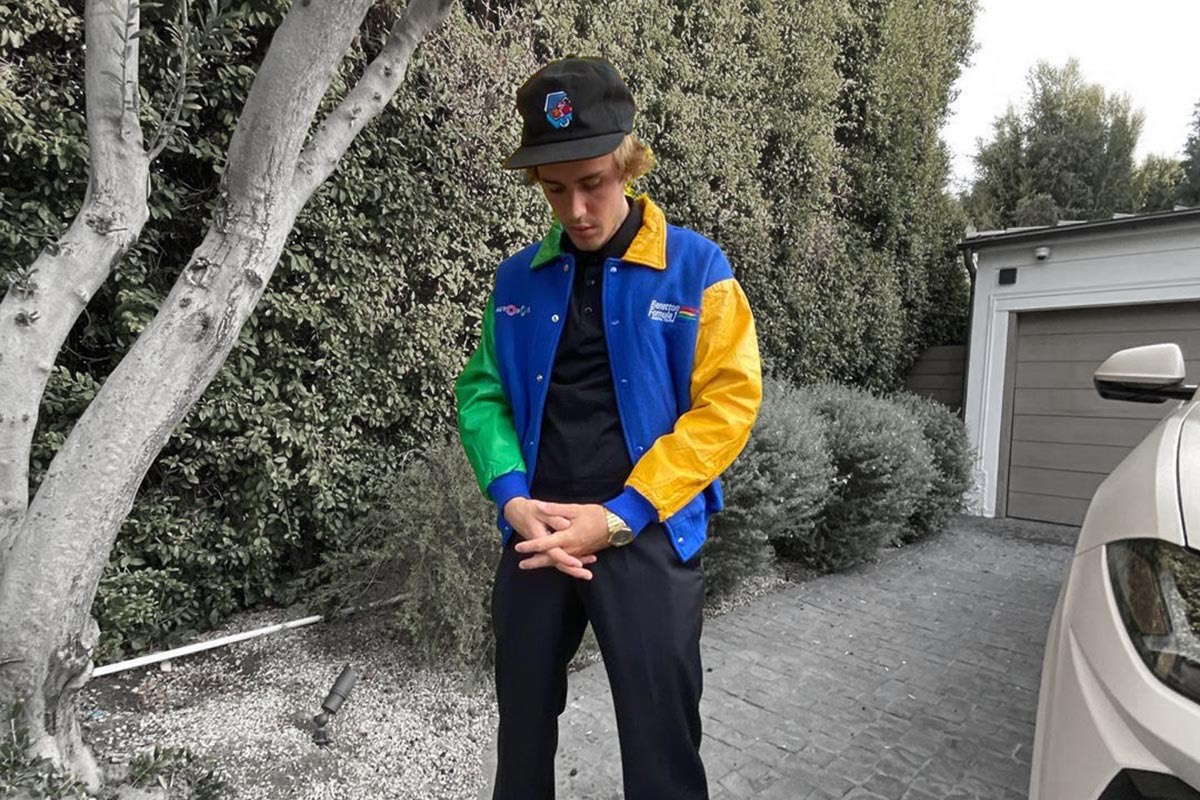 Following Justin Bieber’s fashion choices is to take a ride on one of the wildest sartorial rollercoasters in living memory. The Canadian singer/songwriter sometimes pulls off amazing fits, like this summery ‘Brooklyn bohemian‘ look or this workwear-meets-streetwear ensemble… And then will turn around and step out in multi-coloured Crocs or saggy-crotch tracksuit shorts.

Thankfully his latest get-up is a masterstroke.

Yesterday, Bieber posted a photo of him posing in his driveway next to his Lamborghini Urus (his pride and joy) in a similarly high-octane outfit: contrasting a black six-panel cap, polo and trousers with a colourful 90s Benetton F1 Team varsity jacket, Nike SB Stefan Janoski sneakers and a solid gold Audemars Piguet Royal Oak worth around ~US$100,000.

Normally we’d be honing in on his timepiece but honestly, the jacket is the most impressive part of this fit.

Vintage motorsports memorabilia is often very hard to come by, especially a jacket as distinctive as Bieber’s Benetton number. Go to any good vintage store in Sydney’s Inner West like Cream on Crown or Route 66 and expect to pay upwards of $130, even $200 for a retro racing coaches jacket. That Bieber got his hands on such a nice example of motorsports merch is to be applauded – it’s one hell of a jacket. Perhaps Bieber was inspired by the exploits of his good friend, British F1 champ Lewis Hamilton, with his latest style snap-up – Hamilton’s another big fan of colourful fits.

Benetton was a Formula One constructor that participated from 1986 to 2001, owned by the family of the same name – you might be familiar with their clothing brand, United Colors of Benetton. Famous drivers like three-time world champion Nelson Piquet, Ros Verstappen (father of current F1 driver, Max Verstappen) and GOAT Michael Schumacher all raced for Benetton.

What it means if you wear black nail polish

The Best Online Glasses for Women